The Myth: The Hymen covers the vagina and gets broken the first time you have sex, and is an accurate way of telling whether a woman has had intercourse or not.

Of all erroneous myths about the female body, the hymen has to be one of the most (if not the most) widespread and harmful. The ideas that the hymen must be broken to allow penetration and that this breaking causes bleeding have their origin in age-old ideals about virginity and the correlated desire to be able to quantify a woman’s so-called purity. The myth appears in Biblical passages such as this one from Deuteronomy 22:13:

13 ‘Suppose a man marries a woman, but after sleeping with her, he turns against her 14 and publicly accuses her of shameful conduct, saying, ‘When I married this woman, I discovered she was not a virgin.’ 15 Then the woman’s father and mother must bring the proof of her virginity to the elders as they hold court at the town gate. 16 Her father must say to them, ‘I gave my daughter to this man to be his wife, and now he has turned against her. 17 He has accused her of shameful conduct, saying, “I discovered that your daughter was not a virgin.” But here is the proof of my daughter’s virginity.’ Then they must spread her bed sheet before the elders. 18 The elders must then take the man and punish him. 19 They must also fine him 100 pieces of silver, which he must pay to the woman’s father because he publicly accused a virgin of Israel of shameful conduct. The woman will then remain the man’s wife, and he may never divorce her.
20 “But suppose the man’s accusations are true, and he can show that she was not a virgin. 21 The woman must be taken to the door of her father’s home, and there the men of the town must stone her to death, for she has committed a disgraceful crime in Israel by being promiscuous while living in her parents’ home. In this way, you will purge this evil from among you.’ [1]

The problem with all this is that not all women bleed the first time they have penetrative sex, and even if they do, it doesn’t necessarily indicate that it’s the first time they’ve done it. The hymen is a membrane covering part, but almost never all, of the entrance to the vagina (if it did cover the entire entrance, women wouldn’t be able to menstruate). Some women are born without a hymen at all[2]. It can tear slightly during penetrative sex, as well as when a woman uses a tampon, rides a horse or a bicycle, masturbates, or bounces on a trampoline[3]. Basically anything athletic has the potential to cause the kind of bleeding popularly associated with first-time sex-havers[4]. Bleeding during sex (even the first time) is actually somewhat unusual, and can be easily avoided through proper lubrication and gentleness.
Unlike most ancient myths about sexuality, this one has yet to die out. We can see its influence everywhere: from the ways we talk about sex (‘popping her cherry’) to the ritual virginity testing that’s still commonplace in many parts of the world. This usually consists of a physical examination wherein a doctor or other authority (frequently self-appointed) looks to see the condition of a woman’s hymen, or inserts one or two fingers into her vagina to ‘test’ the laxity of the vaginal walls. If two fingers can be inserted it is supposed that the vagina has been loosened by frequent sex. Both of these are appallingly unreliable methods with no forensic value, because of the natural variation in vaginal tightness and hymen condition, and because of the inevitable subjectivity of the tester’s judgment[5]. These tests have been used to determine whether a woman is a suitable candidate for marriage or whether she is upholding her family’s honor and in some cases to promote abstinence as a reaction to the spread of AIDS-related illnesses (particularly in South Africa)[6].
The two-finger test has also been used in rape cases to determine whether a victim is “habituated to sexual intercourse”[7] (i.e. whether she is sexually active). The restriction of survivor services to victims who are thought to have been virginal at the time of their rape is particularly vile, especially considering the means through which this judgment is made, as inevitably some women will fail the test regardless of their sexual activities or lack thereof. Women’s activists have also drawn attention to the additional physical and psychological trauma that this may cause to victims of sexual violence, and the way it normalizes, for young girls and women, the experience of strangers touching their genitals and making public declarations about their sexual status[8].
Although much of this archaic testing takes place in developing countries, there is also demand for the two-finger test and its subsequent ‘virginity certificate’ from the Muslim community in Quebec, where they are surprisingly still legal[9]. The debate in Canada is about whether it is better for doctors to refuse these requests, which may endanger the young women with no proof of chastity for their families, or to conduct the test or offer a fake certificate. Private medical facilities in Canada have joined the USA, Japan and many other developed and developing nations in offering hymen reconstruction services for thousands of dollars[10].

This is all horrific, and important to discuss, but I want to also to draw attention to the ways this myth affects the lives of everyday women who are not subject to the more traumatic rituals associated with the hymen. The lack of proper description of the hymen is a part of a wider trend in sexuality education of inadequately explaining the female sexual anatomy and all of its functions and variation. Paying no attention, or too little attention, to body parts such as the hymen and the clitoris results in generations of young women who grow up not having a clear understanding of their own bodies, and not wanting to ask questions for fear of embarrassment. Girls become afraid of tampons, gynecological examinations and masturbation because of the perceived effect they might have on their virginity. Check out this Tampax ad[11] from 1990: 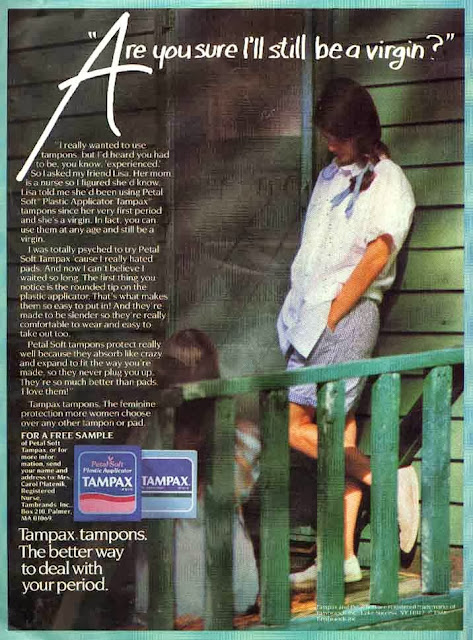 The hymen myth further consolidates the concept of virginity as a physical state instead of a mental one. It deepens the idea that penetrative, heterosexual sex is somehow innately different and more important than any other sexual activity, and that nothing else really counts. We need to start teaching girls that they are the only people who get the authority to comment on their own virginity, regardless of the supposed evidence in the condition of their genitalia. Even better, we could start telling them that virginity is just a word and it doesn’t really matter anyway.


[1] "Deuteronomy 22." Biblehub.com. Accessed October 19, 2013. http://biblehub.com/nlt/deuteronomy/22.htm. True fact: reading this passage when I was about 15 was one of the first things that made me doubt my religious beliefs.
[2] Emans, S. Jean. "Physical Examination of the Child and Adolescent" (2000) in Evaluation of the Sexually Abused Child: A Medical Textbook and Photographic Atlas, Second edition, Oxford University Press. 61–65
[3] Conger, Cristen. “Bicycles, Horses and Hymens.” Howstuffworks.com. Accessed October 19, 2013. http://blogs.howstuffworks.com/2011/05/11/bicycles-horses-and-hymens/
[4] I don’t actually like to use the words ‘virgin’ or ‘virginity’ if I don’t have to. I don’t mind getting a bit linguistically unwieldy to that end.
[5] Dignity on Trial: India’s need for Sound Standards of Conducting and Interpreting Forensic Examinations of Rape Victims. USA: Human Rights Watch, 2010. P.3.
[6] Hugo, Nicola. “Virginity testing and HIV/AIDS: Solution or Human Rights Violation? Consultancyafrica.com. Accessed October 19th, 2013. http://www.consultancyafrica.com/index.php?option=com_content&view=article&id=1066:virginity-testing-and-hivaids-solution-or-human-rights-violation-&catid=59:gender-issues-discussion-papers&Itemid=267
[7] Dignity on Trial, p. 2
[8] Hugo
[9] Urback, Robyn. "The (reluctant) case for physician-performed virginity tests in Canada". Nationalpost.com. Accessed October 22, 2013. http://fullcomment.nationalpost.com/2013/10/16/robyn-urback-the-reluctant-case-for-physician-performed-virginity-tests-in-canada/
[10] “Hymenorrhaphy”. Wikipedia.com. Accessed October 22, 2013. http://en.wikipedia.org/wiki/Hymenorrhaphy
[11] “Are you sure I’ll still be a virgin?” Mum.org. Visited October 22, 2013. http://www.mum.org/virginad.jpg